XSL-FO (Extensible Stylesheet Language – Formatting Objects) is an XML application which describes how text, images, lines and other graphical elements are arranged on a page.

XSL-FO makes it possible to format documents both for display on monitors and for high-quality printing on paper. XSL FO is a page description language with roots in DSSSL which was temporarily developed in parallel with CSS. The key differences between XSL-FO and CSS are the page model (regions in XSL-FO versus the box model in CSS) and the process model (two-tier processing using XSLT followed by laying-out using XSL-FO formatting, versus ad-hoc formatting using CSS renderers).

So-called FO processors exist to generate PDF, RTF, ASCII text and other print media from an XSL FO file. One commonly-used program is the Apache Project’s (see link) FOP, which stands for Formatting Objects Processor. This is a Java application which converts XSL-FO data into PDF documents and also partially supports PostScript and PCL. 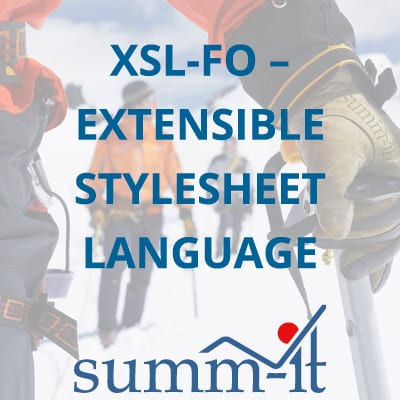