Text recognition, or optical character recognition (OCR), is a concept used in information technology to describe automatic recognition of text within images.

Text recognition is therefore essential, since optical input devices (scanners and digital cameras, as well as fax machines) are only able to output raster graphics, i.e. points of various colours (pixels) grouped into rows and columns. Here, text recognition means recognising letters represented in this way as letters – in other words, identifying them and assigning them the associated numerical value based on standard text encoding systems such as ASCII or Unicode.

Automatic text recognition and OCR are often used synonymously; however, technically speaking, OCR relates only to comparing patterns in separated image segments as candidates for recognising individual characters. This OCR process precedes a global structure-recognition process in which text blocks are first distinguished from graphical elements, then line structures are identified and individual characters are then separated out. Additional algorithms can take the linguistic context into account when identifying a specific character.

Originally, bespoke font types were developed for automatic text recognition and used for purposes such as printing cheques. These fonts were designed to make individual characters quickly distinguishable by OCR reading machines without requiring intensive processing. For example, font OCR-A (DIN 66003, ISO 1073-1) stands out for its highly-dissimilar characters and its numerical figures in particular. OCR-B (ISO 1073-2) is more similar to a sans-serif, non-proportional font, while OCR-H (DIN 66225) is based on hand-written numbers and capital letters.

Meanwhile, the increased power of modern computers and improved algorithms has made it possible to recognise “normal” printed fonts and even handwriting (for mail distribution, for example). However, if readability by humans is not the priority, then bar codes are used, since they are more manageable in terms of printer and recognition technology.

Modern text recognition, however, includes more than just OCR, which is the conversion of individual printed characters. In addition, context analysis methods known as intelligent character recognition (ICR) are added to the mix and can be used to correct the actual OCR-results. In this way, a character which has been identified as an “8” can be corrected to a “B” if it is located within a word. “8ook” would therefore be identified as “Book” instead. The field of industrial text recognition systems therefore refers to OCR/ICR systems. The precise definition of OCR can vary, however, since OCR and ICR also serve as marketing terms which make technical innovations more marketable. Intelligent word recognition (IWR) also falls under this category. This approach attempts to solve the problem of identifying cursive handwriting, in which individual characters are not clearly separated and therefore cannot be identified using conventional OCR-methods. 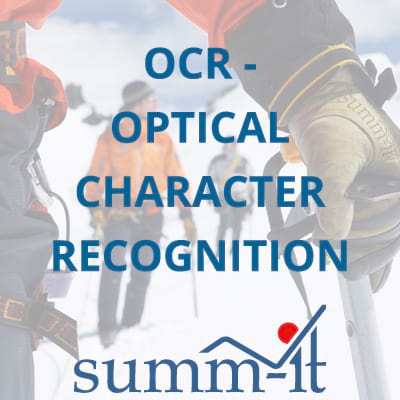