The DataMatrix code is one of the best-known 2D codes. It was developed in the USA in the late 1980s by Acuity Corp.

Today, the DataMatrix code is one of the best-known types of 2D code. It is used for permanent direct laser marking during industrial production (of e.g. circuit boards), for needle-printing during automotive construction, for analytical devices and instruments (in chemistry and medicine), and also as a printed image code for handling documents such as tickets or approving mailed items.

The Data Matrix code exists alongside two different error-correction processes. The original process simply uses a convolutional code for error correction. This variant is named from ECC00 to ECC140, where ECC stands for “error correction code” and the number indicates how much of the data is redundantly stored within the code. More recently, a more powerful Reed-Solomon algorithm has been used for error correction. This variant is named ECC200. It is now generally advisable to only use the new ECC200 version. All variants also use a CRC (cyclic redundancy check) algorithm to identify errors. 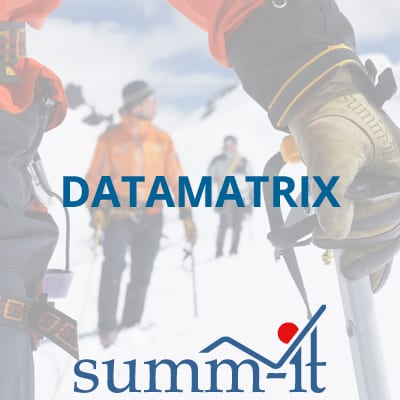